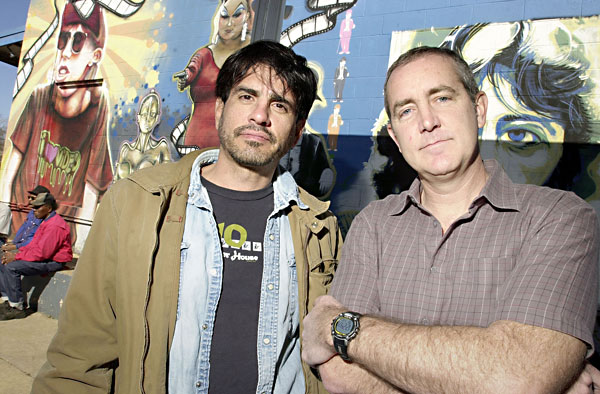 via Austin Chronicle
Remember the death of the great American independent video store? That bleak yet hi-rez moment a few years back when even rental behemoth Blockbuster looked poised to crumple under the combined online assault of Netflix, Hulu, iTunes, and hordes of then-unknown streaming start-ups? Yeah, well, in Austin at least, it never happened. The good guys won, mostly. Yes, longtime local indie Encore Music & Movies fell victim to the online marketplace, but on the plus side, the commercial rental chains (what’s left of them) are walking dead while the status of corporate DVD rental outlets is shaky at best.
And now here’s Austin’s beloved indie video mecca I Luv Video celebrating not only their third decade in the video rental biz – 28 years in their current incarnation, to be precise – but also the 30th anniversary of the release of Ridley Scott’s Blade Runner and co-owner Conrad Bejarano’s 50th year on the planet with a massive, costume party-cum-screening of Scott’s soggy, dystopian masterpiece in its rarely seen original cut, complete with Harrison Ford narration and all. “That was the first laser disc I ever bought,” explains Bejarano, “and it’s by far my all-time favorite movie. Make sure you mention that we’re giving away an original Blade Runner one-sheet signed by Scott and all the major cast members.” (Done.)
As if that weren’t cause enough for tipsy, retro-futuristic merriment, the blowout – slated for Friday, July 20 at the Spider House 29th St. Ballroom – is also doubling (tripling?) as a launch party for I Luv’s new and improved (i.e., slightly less cluttered) web presence, something that co-owners Bejarano and John Dorgan have been meaning to redesign for some time.
Reflecting on the origins and success of what is one of the most gloriously overstuffed indie video outlets in the country (second only to Seattle’s famed Scarecrow Video), Dorgan says, “We’ve always had a very nontraditional, nonjudgmental way of running [I Luv Video]. Customers would come in, and still do, just to hang out and talk about movies, music, whatever. And I say this in all humility, but I think that’s what’s made us the best. Austin is what really made I Luv Video. The employees did, the customers did, the culture did. [Conrad and I] were just facilitating. And it was just so exciting to be a part of these discoveries that people were making about films. It’s fun to be the one to pass on a really cool film to somebody. And that’s kind of always been our ethos.”
As somebody who lives for those pristine, ecstatic moments of cinematic discovery and for the visceral pleasure of turning others onto those discoveries, I get Dorgan’s point. And as both Bejarano and he have been quick to point out again and again, the two I Luv Video locations – and, it goes without saying, their friendly competitors over at Vulcan Video – act as much as community cultural centers as they do retail, sales, and rental services. Like the sign on I Luv’s Guadalupe store said (up until recently), “A Redbox never gave me free beer,” a reference to I Luv’s predictably popular and self-explanatory “Free Beer Tuesdays.”
In a very real way, wandering into I Luv Video’s cavernous Airport Boulevard location is akin to stepping into the hallowed, musty, imagination-firing library in Ray Bradbury’s Something Wicked This Way Comes. It’s a place of refuge from the clamorous and chaotic reality outside, but just as often an embarkation point for the even more complex, challenging, and downright magical multiverse of cinema.
Sure, Netflix and its online iterations are still a threat, of sorts, but they’ve been taken down a notch or three by the seemingly sudden and still somewhat tentative boutique trendiness of, for instance, Alamo offshoot Mondo’s sporadic forays into limited edition VHS re-releases. VHS, and by extension video outlets like I Luv Video, are seeing their cool factor grow exponentially. Like a virus. Or, apropos of everything, a zombie outbreak. There’s even an I Luv iPhone app somewhere not too far down the road, according to Bejarano.
So, rumors of the demise of Austin’s indie video outlets appear to have been somewhat exaggerated, and while video may have killed the radio star (and not a moment too soon), nothing seems to be able to kill video. And that calls for a party.